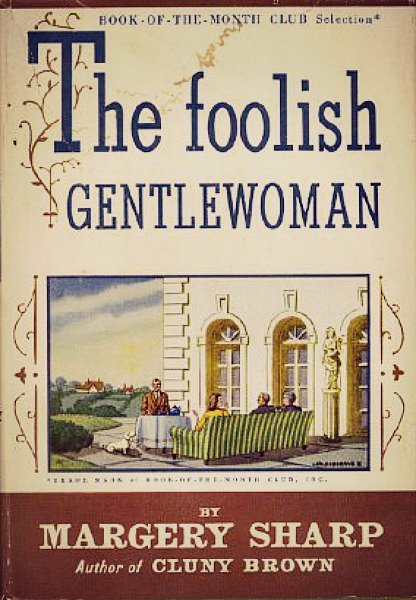 “The Foolish Gentlewoman has a moral. I meant it to show that the right thing to do is always the thing that is not only right, but nearest to your hand.” — Margery Sharp

Isabel Brocken is the foolish gentlewoman of this novel. Her gentle, sentimental nature provides the basis for Margery Sharp’s moral tale, wherein the classic ‘poor relation’ motif of literature is given a fresh approach. It is a simple story, but shadowed with complexities because of the recent devastations of war. 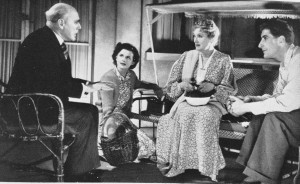 Scene from the play ‘The Foolish Gentlewoman’ starring Sybil Thorndike

The scene opens—for scene it is, as it was conceived of as a play—in a lovely country manor house owned by Isabel Brocken. A smattering of characters; war-weary relations, for the most part— find a temporary respite in the kindly hospitality of Isabel.

The cast is:
Isabel Brocken, the aforementioned daffy gentlewoman—in this case, an eminently likeable one. It is made very clear that Isabel is a product of the Victorian age; her manners, morals, respectability, and sense of duty are all highlighted as having a direct connection to her pre-war, middle-class upbringing. Isabel has something on her conscience, and has devised an ingenious plan to absolve herself of guilt before she dies.

‘It was really quite simple. She had (belatedly realized) ruined Tilly Cuff’s life; her own life, so easy and happy, was the pattern of what Tilly’s might have been. What could she do but try and give up, so to speak, her place to Tilly?’

Simon Brocken: the grumpy bachelor misogynist who provides one of the few voices of reason; his late brother was married to Isabel. One of Margery Sharp’s unusual story-telling devices is that of unfolding a story through the eyes and perspective of a sober male lead. Simon Brocken is one of her best examples of this. Isabel Brocken is “foolish” because Simon considers her so. He is the only character with this perspective. Simon is also of the same generation as Isabel, and bemoans, through the story, the changes that two wars have wrought on all their lives.

‘What he longed to return to was an orderly world. No one, in Mr. Brocken’s opinion, had tasted the sweetness of life who had not lived before 1914…Such was the picture revived, and perhaps a little gilded, by Simon Brocken; but gilded or not, where now could one find a picture to match it?’

Tilly Cuff: the poor relation. No one likes her, she is pathetically unlikeable. But her predicament drives the story, and the moral. She provides the subtle under-weaving of tragic pathos in this ‘light as air’ tragi-comedy.

‘An angular, screechy older cousin of Mrs. Brocken, this creature, “yellow as a plucked chicken,” is a busybody who can “scent a private conversation as a cat scents fish.” Her cheeks hideously rouged, her arms like drumsticks and her gown some 20 years behind the fashion, Tilly barges into the well-arranged life of Chipping Lodge to create havoc.’  — excerpted from the New York Times review, 1948

Humphrey: a nephew to Isabel, served creditably during the war; now hoping for a peaceful respite, and perhaps a bit of a romance. He is quite fond of his aunt; (read: uncritical) which makes us like him.

Jacqueline: sensible, intelligent; companion to Isabel. She provides the lukewarm romantic interest for Humphrey…will they, or won’t they?…might cross your mind. Or not.

The mysterious Pooles: A mother/daughter duo; they also inhabit the house, quietly; it is almost as though they exist in a different world. This fascinating little duo provide another motif for Sharp’s moral tone. Aptly named, not actually servants but more like ‘caretakers’ who are given wide reign to do what they like; they provide a pool of tranquil disattachment to the goings on in the rest of the house. That is, until Tilly Cuff arrives. To say that they have caught the attention of dour Simon Brocken—and that he likes them—speaks volumes, in itself.

Dora Tremayne: A dear friend of Isabel’s who provides a lovable comic relief. Outspoken, ‘a perennial wallflower’, she is cheerful and undaunted by hard times. She can be relied upon to say what others are thinking. Once wealthy, the world has not been kind to Dora’s fortunes and she now works to earn her meager living as the receptionist at Madame Esme’s Beauty Parlour.

“Certainly I’m invaluable,” agreed Miss Tremayne complacently. “I am the woman who never had a facial. I sit there in all my natural decrepitude, and after one look at me our clients hasten to enroll themselves for a course of tinting and massage. Madame Esme is nobody’s fool.”

Margery Sharp is ever a bit nostalgic for the days before the wars. Although she is straightforward about some of the failures of the Victorian generation, Sharp clearly misses the loss of an orderly, well-run society. It is easy to imagine that many of the regretful musings of Simon Brocken come straight from the author’s own feelings.

‘Simon meditated nostalgically for some minutes; but even dearer to his recollection was the general atmosphere of order and decorum…..Laxity was unknown, at any rate upon Chipping Hill: the parent Brockens, like the parent Masseys, brought up their offspring to count their blessings, do their duty, and respect their elders. Yet the regime was not oppressive, it produced cheerful households, full of plans and pleasures; able to bear misfortune when it came.’

Sharp’s tale brings the contradictions of the new, 1946 normal to the fore in the dilemma of Tilly Cuff. Can it be a better world for everyone? Is it more about ‘getting back to the way things were’? What will the changes in society mean for those who were never on the receiving end of ‘society’ in the first place?

“Have you got used to it?” Humphrey asked [Jacqueline]…
“Used to what?”
“To peace. To not being at war. To having a future.”

In the Victorian world of Isabel’s gentle upbringing of white dresses and lawn tennis, girls like Tilly ‘knew her place’. She was rarely heard from, and kept very busy. In the post WWII society, Tilly had become a disturbingly manipulative hateful baggage of aging womanhood, and everyone, even of the kindest among them (which was Isabel) disliked her and wished her far away. Clearly, Sharp wanted this ‘moral dilemma’ to be, not just difficult, but excoriating, and created as strong a dichotomy of character as possible in the two women, Isabel and Tilly.

‘Isabel reflected a moment… “Jacqueline and Humphrey don’t understand; but in my young day, and Simon will remember it, people put up with their relations. Some of ours weren’t very nice, but they all came and stayed with us, and [my sister] and I even had to go and stay with them. It’s only lately that people feel they have a right to choose their company.’

As the story developed, we see more of Tilly and, not only her negative influences upon those around her, but the authorial voice points out some of the influences that had worked on Tilly.

Scene from the play: Tilly Cuff receives her ‘recompense’

“I think the basic idea is that people often aren’t bad but circumstances sometimes make them so.” — Interview with Margery Sharp, Counterpoint, by Roy Newquist, 1964

Thus, from this point of view, the ‘foolish’ gentlewoman is really not so foolish. Tilly Cuff is not really bad, and, given the right circumstances in life, she can even improve.

As to whether it is a happy ending or not, that was not Margery Sharp’s aim when she took up her pen and wrote what was, essentially, an elegy to former days. Curiously, though, given the circumstances, the ending felt right.

Excerpt from Theatre World, 1949: ‘Margery Sharp’s clever play, which was reviewed in our last issue, is the occasion for some brilliant acting from Sybil Thorndike and Mary Merrall in two highly contrasted roles. As ‘the foolish gentlewoman’ of the title, Dame Sybil is enchanting, while Mary Merrill as the embittered spinster whom Isabel Brocken cheated out of matrimony, convinces in every line and movement.’ 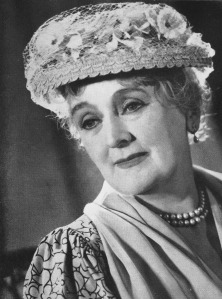 To see the amazing versatility of Sybil Thorndyke in two of Margery Sharp’s characterizations, see here.

For more on Margery Sharp’s works of tragicomedy, see here.

5 thoughts on “The Foolish Gentlewoman” 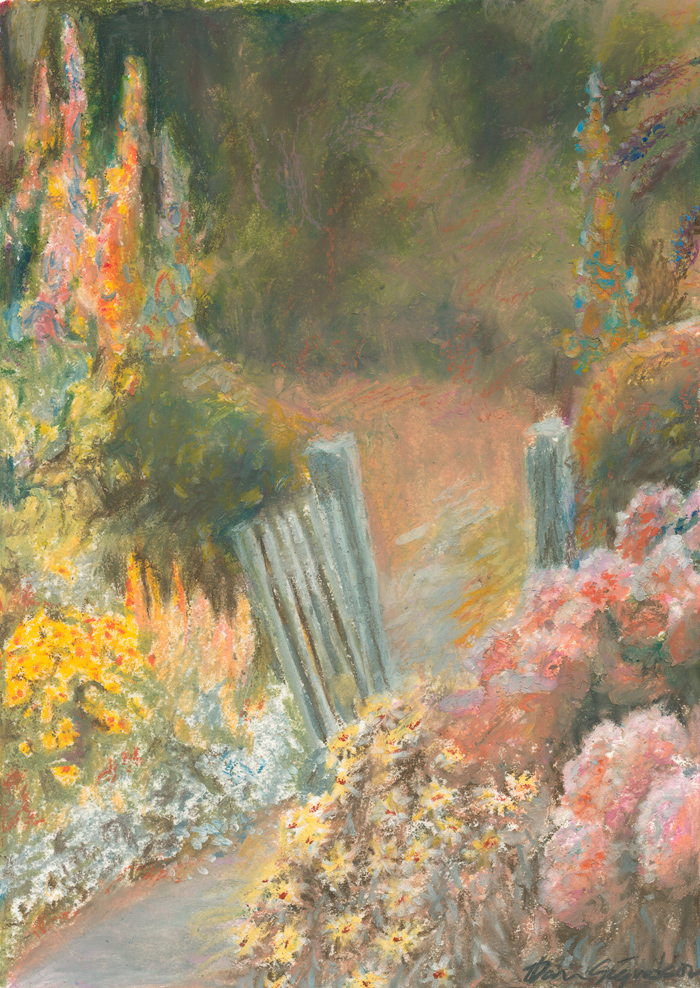